Tithing Family Home Evening (The Parable of the Skittles)

We did a very simple family home evening last night to help our children understand WHAT tithing is,  WHY we pay it, and HOW it blesses us.  Although it was short, it really kept the kids attention (anything to do with candy usually does!;) and I think they learned a few new things.

I was so excited when I walked into Primary on Sunday and this little poem was written on the chalkboard: 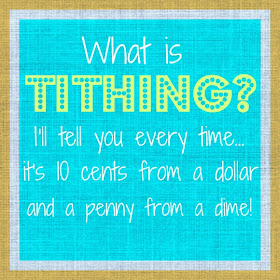 I knew I was wanting to do a FHE on tithing the next day, and I thought that poem was perfect to help little kids understand what tithing is!

We started off by talking about the poem and asking the kids what they knew about tithing.  The older girls knew you gave 10% of your money...but the poem really helped them understand a little bit better what that really meant.

Next I told the kids that Paul had something he wanted to talk to them about.  Then he pulled out 3 plastic bags full of Skittles.  Each bag had exactly 100 Skittles in it. 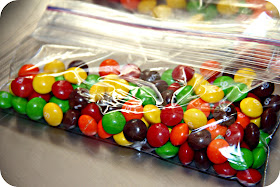 Paul told the kids he had gone to the store that morning and bought some Skittles for himself.  Even though the Skittles were ALL his, he wanted to give some to his children.  All that he asked for in return for giving them that HUGE bag...was for them to just give 10 little Skittles back to him. 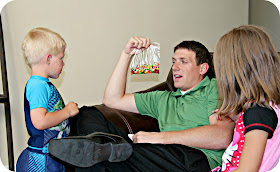 One by one the kids counted out 10 Skittles and handed them to Paul.  I told them to look at what they had given Paul, and then to see how much they still had  in their bags. 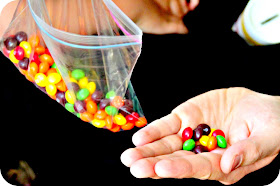 Then we explained that is just how tithing works.  Heavenly Father has blessed us with EVERYTHING that we have.  Paul talked about how he has been blessed with a good job, and talents to be able to succeed in that job.  Heavenly Father gives us all that and so much more...and simply asks for 10% in return.  I think it really clicked with the kids to be able to look at ALL the Skittles they had been given, pick out just 10, and then see what they still had left.

To help the kids get excited about paying their own tithing I threw these little tithing banks together.  Around Valentines I had gotten some candy containers that doubled as banks.  I just covered them with white paper and then used washi tape to decorate them.  The kids were SO excited to have their own banks and ran up the stairs to get their tithing to put in them :) 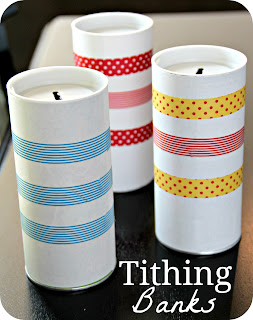 I think this lesson is so important for young children.  Tithing can be a difficult principle to live if you don't get in the habit of paying it early and paying it FIRST!  I hope to encourage my children to be able to do that.

I would love any feedback...how have you taught your children the principle of tithing??